Next Article Back to The Latest
Village Life

Rebecca Adlington returned to the former Athletes' Village, and was shown around by resident and vlogger Calum McSwiggan. She visited Chobham Academy, saw the home that she once lived in, and unveiled an Olympic Plaque. 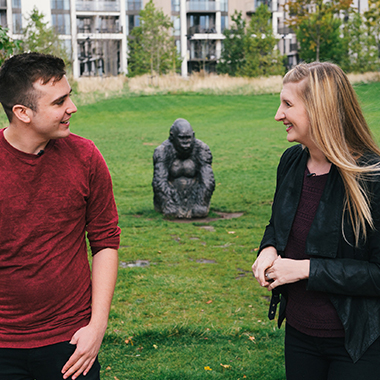 Two time gold medallist Olympic swimmer, Rebecca Adlington, OBE, returned to East Village, the former Athletes’ Village three years on from London 2012 to unveil one of several new plaques installed by Get Living London to celebrate where the athletes lived during the 2012 Olympic and Paralympic Games.

Rebecca said “I’ve had a great day revisiting the Athletes’ Village – now East Village - and unveiling the first commemorative plaque with the local residents. I made so many memories here during the Olympic Games, and it’s fantastic to see that Get Living London is doing everything they can to keep the legacy of London 2012 alive in this thriving community.”

Neil Young, CEO of Get Living London, said: “We have really enjoyed welcoming Rebecca back to where she lived during the London 2012 Games, and showing her around what is now called East Village. It’s been three years since East Village hosted more than 17,000 competitors and support staff. Then we were the Athletes’ Village and today, home to more than 5,000 residents across more than 80 nationalities, we have very much established a new London neighbourhood.’

Rebecca was taken on a tour of East Village, which has been transformed over the past three years by Get Living London into a buzzing community of renters living on the doorstep of Queen Elizabeth Olympic Park. She visited a number of places including Victory Park, local retailers including café and bar Tina, We Salute You and Italian bakery Signorelli, and meeting local schoolchildren at Chobham Academy, which was recently rated Outstanding in its first Ofsted inspection.